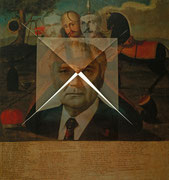 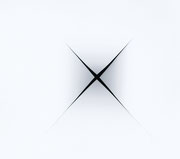 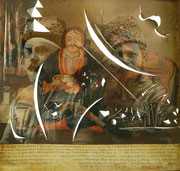 The boundary between history and fiction is to be sought at the scene of action. Where the skein of history gets particularly tangled, scars are left on the planet ― they can be read in the configuration of the terrain, arrangement of roads, winding of rivers, and sometimes even in the faces of the local inhabitants. Despite the multiple layers of time, something lingers on in the air. Or is it but a futile flight of imagination?

Ukraine’s history literally flows down the Dnieper river. Each of its two banks used to host a different world: a sedentary one and a nomadic one. The river forms a natural boundary of the Wild Fields. In the 18th century Zaporizhian Cossacks built outposts on Dnieperʼs rapids to defend the frontier. Yet today it is very hard to conceive the Cossacksʼ real role in history, as they are now portrayed and imagined in a purely decorative function. This pseudofolkloristic, depersonalised Cossack was supposed to represent Ukraine among the other Soviet republics, reducing its specificity to a grotesque image. This is how Cossacks are mostly viewed even in todayʼs Ukraine: their image has been completely deformed and taken away from reality into the realm of myth.